Skip to content
January 19, 2023
Blog
A blogpost by Eli Mitchell-Larson and Sylvain Delerce 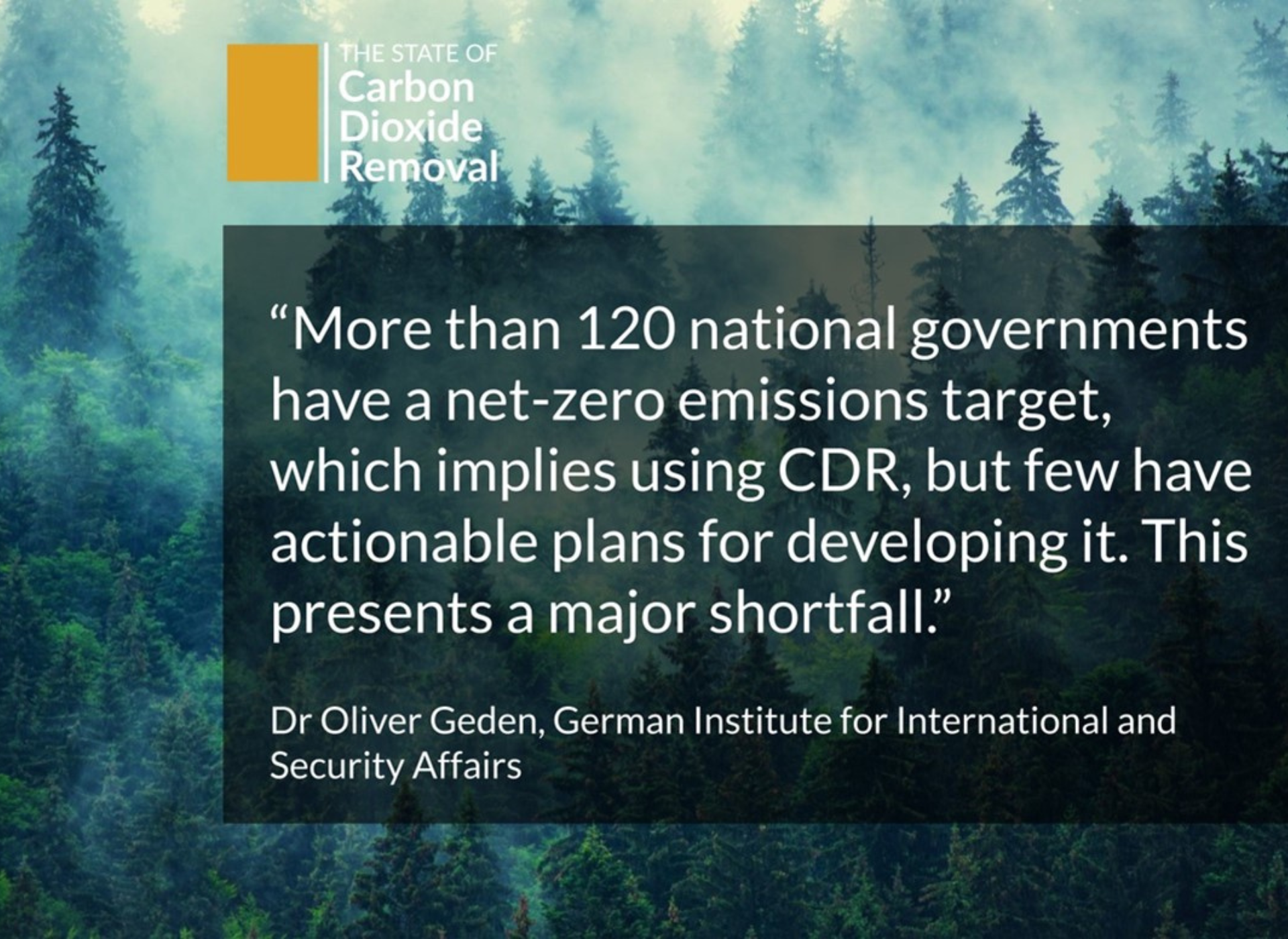 The world of carbon dioxide removal moves fast. New methods are constantly being piloted, companies formed, corporate purchases of removal credits announced, and government funding opportunities devised. The first-of-a-kind report, released today, The State of Carbon Dioxide Removal looks at the progress of carbon removal through many lenses, from the research and innovation to policy and public acceptance. It assembles data to estimate how much carbon is being removed from the atmosphere today and by which methods, and shows just how far we have to go to reach the volumes needed to ensure a safer climate.

First and foremost, the authors restate the importance of limiting our dependence on carbon removal to a minimum to manage risks and uncertainties associated with its massive scale up.

This can only be achieved by rapidly reducing emissions.

Critically, the report offers an updated assessment of the level of deployment of carbon removal. This total carbon dioxide removal (CDR) capacity is estimated at just over 2,000 million tonnes of CO2 per year, nearly all of it from land and biomass-based methods such as afforestation, reforestation, soil carbon in grasslands and croplands. Only a tiny fraction, around 1% of the total, is delivered by ‘novel’ methods ranging from mineralisation to biochar to direct air carbon capture and storage (DACCS).

This is consistent with the relative maturities of different CDR methods. It also means that almost all the carbon currently being extracted from the atmosphere is stored in the biosphere (soil and trees mostly). Halting ecosystem destruction and increasing this uptake of carbon into the biosphere is crucial. However, we cannot rely exclusively on nature to clean up our mess, as biosphere carbon reservoirs have a finite capacity and carry a higher risk that the stored carbon will be re-released into the atmosphere, due to disasters such as fire or disease, or human action such as deforestation.

This is why it is so important to support the rapid development of other CDR methods, in particular those compatible with high-durability storage that return the bulk of fossil carbon to the geosphere. These include various forms of biomass carbon removal and storage, enhanced weathering, DACCS, mineralisation, or biomass burial.

As the report authors state, the coming decade is key for novel CDR methods to mature and rapidly scale up, if they are to deliver their necessary contribution by the 2030s and 2040s. Along with increased funding for research and innovation, creating an enabling policy environment and long-term deployment incentives will be decisive for the carbon removal ecosystem to grow at the required pace.

The report highlights the large gap between how much CDR is currently being deployed and how much CDR is needed, as indicated in IPCC scenarios compatible with international climate goals. The gap is significantly larger for methods compatible with geological storage. As daunting as this removals gap is already, even more removals may be needed after the net zero date to eliminate carbon emitted between now and 2050, pulling temperatures back from the brink. 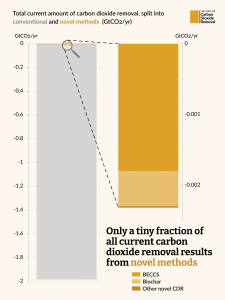 Post-2050 climate objectives need to be planned for today. Furthermore, as ecosystems are challenged by the changing climate, their ability to continue storing carbon dioxide will decrease and some may even flip and start emitting carbon. As our scientific capability to project reduced carbon removal capacity and increased reversal risk continues to improve, we expect renewed urgency to shore up ecosystem resilience to prevent such reversals, and increased ambition to scale up carbon storage methods with lower reversal risks.

How CDR is deployed, how the captured carbon is stored, and how the use of carbon removal is balanced with other climate solutions, are important questions that civil society needs to engage with. The report suggests low levels of overall awareness, positive acceptance of nature-based CDR methods such as forestation, and shades of skepticism toward engineered CDR methods such as DACCS or bio-energy with carbon capture and storage (BECCS).

Because a wide array of both mature and currently nascent CDR methods must be responsibly scaled up in the coming decade, we will need to redouble efforts to raise the level of awareness through demonstrations, open debate, and compelling stories of successful, environmentally-sound carbon removal.

The release of the first edition of The State of Carbon Dioxide Removal is an important milestone for climate, and a significant achievement by the many contributing authors and reviewers. However, work to monitor and report on the state of carbon removal will not stop here. Each successive report will create an opportunity to broaden the working group, diversify sources of information and input, and provide an accessible outlet for a range of carbon removal stakeholders to transparently report what is happening on the frontlines.

Future work could seek to address regional and country-level data gaps for more localised estimates of CDR potential, create deeper linkages between carbon dioxide transport and storage build-out and the planned volumes of removals, and delve into a range of issues which stand in the way of a global cooperation such as transborder carbon dioxide transport and accounting and establishing consistent verification and certification standards.

Carbon Gap is a funding partner of The State of Carbon Dioxide Removal project. We look forward to contributing as this project continues its important mission in 2023 and beyond.

Nearly all current CDR is from land and bio-mass, only 1% is delivered by engineered, or ‘novel’ methods.

The coming decade is key for ‘novel’ CDR methods; increased research and innovation funding, an enabling policy environment and deployment incentives are needed.

Future reports could include localised estimates of CDR potential, create deeper linkages between carbon dioxide transport and storage build-out and the planned volumes of removals, and delve into a range of issues which stand in the way of a global cooperation.