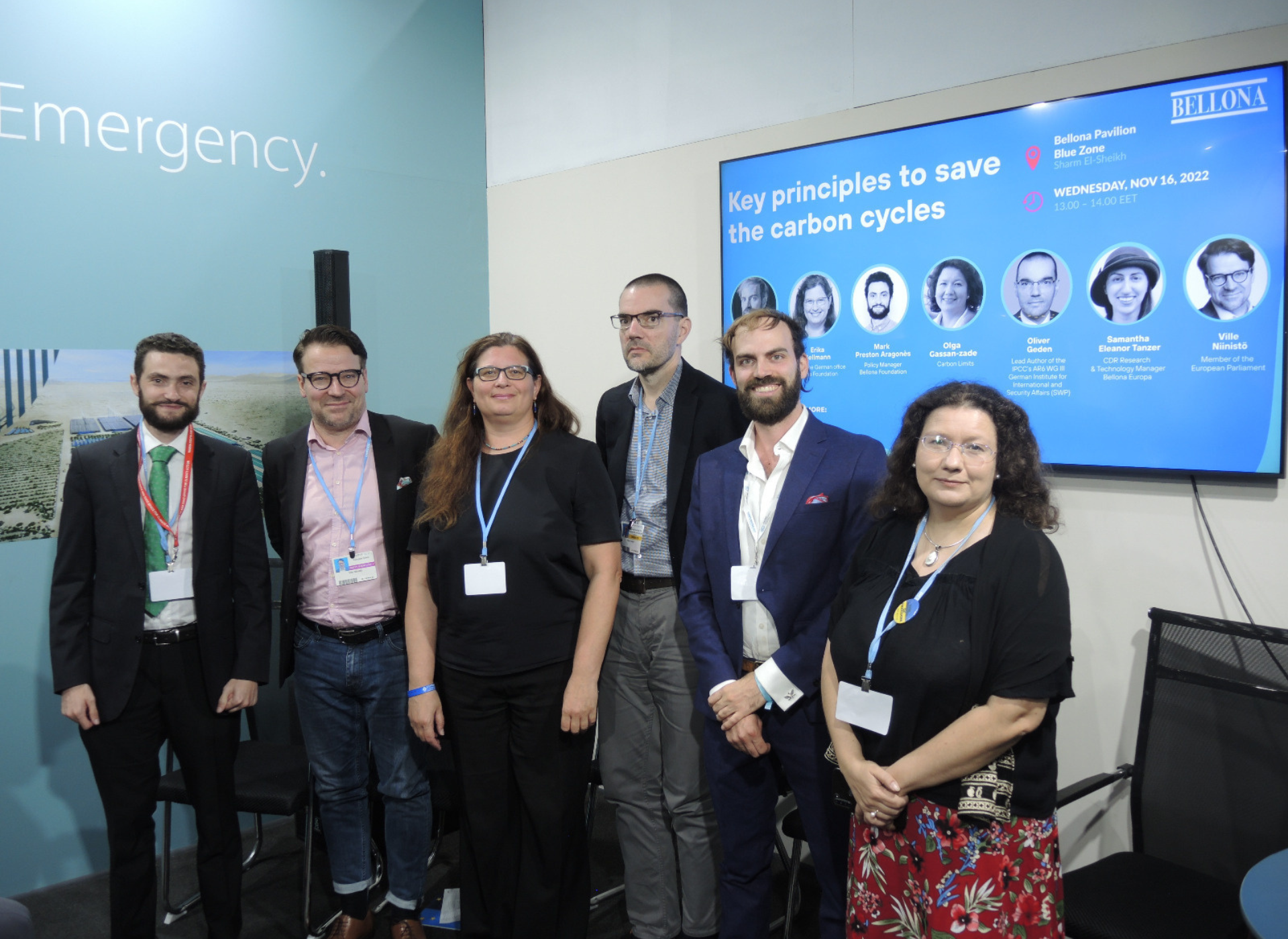 To date, discussions on carbon dioxide removal (CDR) have been driven by high income countries with the financial and legislative muscle to get things off the ground. At COP27, Eli and Kayla noted a shift in discourse as CDR leaders from the Global South forcefully entered the fray. In the last instalment of their COP retrospect, they discuss this development and highlight key ideas from the civic zones.

Among the most exciting Blue Zone events we attended was “Carbon Removal: Pioneers from the Global South” an official UN-endorsed Futures Lab organised by the Climate Champions Team. Moderator James Mwangi explained that many Global South countries are uniquely placed to foster CDR given their abundance of land, coastline, ingenuity, labour and renewable energy potential. CDR was framed as an opportunity for developing economies, for example across Africa, where investment in CDR could help develop the continent’s vast renewable energy resource. At the event, we heard from speakers working in India, Kenya, and Uganda across regenerative agriculture, biochar, mangrove conservation and afforestation, and direct air capture methods, and Fridays for Future activist Maria Reyes shared her vision for how CDR could serve as a mechanism to realise climate reparations. A justice-based lens was also levelled at CDR in the Innovation Zone, with calls from Indigenous Rights advocates to integrate benefit sharing, community rights, and sovereignty demands into carbon removal certification mechanisms drafted in the Global North.

Many Green Zone events also had a focus on the Global South, including those discussing carbon removal. For example, at “Climate-smart agriculture and carbon capture in Africa”, the link between agroforestry, sustainable land management, and carbon drawdown was emphasised, as were the co-benefits for empowering women, smallholders and communities at large. In places where farming and poverty are starkly entwined, as is the case in sub-Saharan Africa, investment in ag-based CDR could have an outsized socio-economic impact. Just as there are many legislative and financial initiatives in the works to boost emerging CDR technologies, so too should nature-based methods benefit from ambitious approaches to help them sustainably scale. The high price of durable carbon removals is not the only economic hurdle facing CDR; if the vast capacity for terrestrial carbon sequestration is to be realised, cycles of poverty besetting many smallholder farmers must be overcome. Wherever the cost is too high for farmers to forfeit short-term gains in pursuit of sustainable land management practices, the world risks turning natural carbon sinks into carbon sources.

One way to help farmers make sustainable agriculture economically viable is through soil carbon credits or other incentives and rewards. Speaking at the Farmers as Soil Carbon Stewards event, the Sustainable Food Trust argued that to do this we need a universal language for assessing soil carbon outcomes. If agriculturalists worldwide were to build soil carbon, the Trust postulated that atmospheric carbon could drop by 100 ppm.

Turning to the Blue Zone, Carbon Gap organised, moderated or spoke at a series of side-events. These sessions offered new evidence, ideas, and calls to action on how to increase ambition to remove carbon, establish safeguards to ensure removals are not used spuriously, carefully measure and account for their climate benefits, and lay a course for urgent scale up. Below, we summarise each event, highlighting memorable moments and “big ideas” to take forward into 2023:

Carbon Gap’s side-event was dedicated to raising corporate ambition for CDR and climate action more broadly. During the session, which featured esteemed panellists from scientific, business, and moral philosophy backgrounds, we launched “Bridging the Ambition Gap”, a report co-authored by Eli and Robert Höglund. This report aims to redefine what reasonable voluntary commitments to climate action from companies should look like in 2023 and beyond. Our analysis shows that companies’ ability to contribute varies widely, with some raking in substantial profits (in “dollars per ton of CO2” terms) yet having relatively few emissions, and others emitting enormous volumes of carbon but generating low profits per ton. It was fitting that we presented these findings during COP, where “common but differentiated responsibilities” for countries were invoked by negotiators edging toward an agreement on loss and damage.

Panellists, including Stripe’s Climate Research Lead Zeke Hausfather whose recent article in The Guardian explains why CDR is needed, agreed with the report’s main contention: for companies on both ends of the profits-per-ton spectrum, thinking only in terms of compensating for emissions on a ton-for-ton basis can lead to lower ambition. This applies to both highly profitable companies (who could do much more) and less profitable companies (who could fall into the trap of buying cheap and ineffective carbon credits) alike.

Moral philosopher Professor Henry Shue brought the event to a powerful close, reminding us that the best way to allocate responsibility for cleaning up the climate mess is according to cumulative emissions. But, he cautioned that this logic is complicated by the fact that many of those responsible are long dead. He added that “ability to pay, interpreted in a progressive way, is actually better than flat rate [levels of compensation for pollution]. The people who have the excess capacity can do more.” COP provided the perfect launching pad for this message, which we’ll be amplifying in the coming months and years.

At “Key Principles for Saving the Carbon Cycles”, Eli moderated a discussion on which principles should be put in place to ensure integrity, not just of CDR activities in a vacuum but of how removals are used by countries and companies looking to compensate for their unabated emissions. This question of appropriate uses of removals has never been more relevant, as laid out in our Certification White Paper and response to Europe’s proposed Carbon Removal Certification Framework. During the event, several notable ideas were shared, and below we rehash a few.

First, Bellona’s CDR Research & Technology Manager Dr. Samantha Tanzer explained the case for keeping land and geological carbon sinks separate to ensure coherent carbon accounting – a principle which Eli contributed toward defining as “durable net zero”, and which we believe the EU is well-positioned to advance. Dr. Oliver Geden, lead author for the IPCC working group 3 report that set a unified definition for removals, laid out the scientific case for this concept. Together, they mounted a compelling case for why removals with higher-durability (e.g. geological) and lower-durability (e.g. land sector) carbon storage need distinct incentives and separately governed use cases. Dr. Erika Bellman, a Managing Director at Bellona, shared a proposed legal framework for maintaining separate targets for emission reductions and removals in Germany. We were honoured to hear from Member of European Parliament Ville Niinistö, a leading figure in the Green League and a powerful champion for the restoration of Europe’s ecosystems, who called for guardrails on how CDR is used under European law and in the voluntary carbon market to avert greenwashing, as well as clear safeguards to ensure that biomass used for energy or removals is sustainably and ethically sourced. Lastly, Olga Gassan-zade, a member of the Article 6.4 Supervisory Body, issued a call for engagement from environmental NGOs, members of civil society, and experts as the Body looks to finalise its recommendations for how removals can be accounted for in international carbon markets.

At “Scaling Durable Carbon Removals: What Role for MRV and GHG Accounting””, we tackled the multidimensional question of how this subset of carbon removal methods can be quantified and verified effectively. First, government representatives shared their insights, including Dr. Jennifer Wilcox who leads the U.S. Department of Energy’s $3.5B deployment of “Direct Air Capture Hubs”. We were particularly excited by the precedent set by the DAC Hubs program, in which 40% of the benefits must flow to disadvantaged communities. Next, Eli moderated a dynamic panel showcasing how supranational and private organisations are crafting CDR certification schemes that, in some ways, have moved well ahead of government.

Even across a group that broadly agrees on the unequivocal need to scale CDR, there were strong differences in approach. Sabine Frank, Executive Director of Carbon Market Watch, called for further investigation of the potential side effects of engineered removals and challenged whether the focus should be on scaling higher-durability removals when emissions have not yet peaked (more soon on “mitigation deterrence” and how Carbon Gap engaged with this important topic at COP). The response was equally robust, with panellists pointing out that large-scale energy transitions cannot happen overnight and we have to start building engineered removal infrastructure megaton by megaton if we want any reasonable hope of achieving the scale required to deliver a safe climate.

Lastly, “Scaling up Engineered Carbon Removal” brought many of the themes above together in a robust discussion among CDR experts, financiers, and practitioners.

Multiple panellists called for bridging carbon removal’s human capital gap, which will require training (and re-training) thousands of skilled workers across finance, engineering, verification, and construction. To paraphrase, we’ll know we’ve succeeded in scaling higher-durability carbon removal when there are more hard hats and steel-toed boots in CDR than laptops. There was friendly but notable disagreement among panellists over whether carbon removal should in fact be framed as a “third pillar of legitimate climate action” alongside emission reduction and adaptation.

The panel also offered an opportunity for Eli to preview Carbon Gap’s approach to two important areas: 1) defining permanence and durability, and 2) confronting the threat of “mitigation deterrence”, which is the question of whether the scale up, use, or even existence of carbon removal could delay needed reductions in emissions.

On the first, Eli echoed the definitions he first proposed at TED Countdown namely that “permanence” and “durability” are distinct. Durability refers to a physical quality of stored carbon: its risk of reversal to the atmosphere. Permanence reflects an idealised state in which carbon remains safely stored in perpetuity, which is more of a litmus test to compare real-world storage against than an attainable goal. The difference is crucial, as it allows us to describe the attributes of different carbon removal methods in a non-pejorative way according to the biogeochemical security of the stored molecules, rather than qualitative assessment of the strength of our legal institutions to maintain a given land use, for example.

All in all, the civic zones at COP27 proved fertile ground for CDR. New initiatives, and legislative proposals were announced, ambitious targets were set, and perspectives from the Global South were shared. At Carbon Gap, we so valued the opportunity to learn from the growing international CDR community present at COP, and we look forward to engaging further with the ideas and calls to action expressed.

Carbon Gap’s Chief Science and Advocacy Officer Eli Mitchell-Larson moderated or spoke at the following events converging around the theme of scaling CDR in a swift, principled way.